On Thursday, November 30, 2017 I attended my first ever American Anthropological Association (AAAs) Conference. I’ve been regularly attending professional conferences for over seven years, but the AAAs were both overwhelming, exciting, and unlike any other conference I have been to before. The sheer size alone was almost jaw dropping. There were approximately 6,000 people in attendance (!!), meaning that there were over 40 sessions at any given time between 8am and 8pm – totaling 750 sessions across five days. In fact, the conference was so large that it was held in two adjacent hotels in Washington, DC. Session topics ranged from roundtables on feminist ethnographies to oral presentations on manhoods and masculinities, from presentations on the global refugee and migrant crisis to the rise of 21st century nationalism in Europe and the US. The AAAs are an international conference and presentations focused on diverse cultural issues from an array of locations across the globe.

This year’s theme was “Anthropology Matters” and numerous sessions focused on diversity, social justice, and the role of anthropology in a politically and socially turbulent world. One of the most intriguing sessions I attended was “Between Visibilities and Invisibilities: Forms of Racism and Anti-Racism in the Twenty-first Century”, organized and co-chaired by Faye Harrison (University of Illinois at Urbana- Champaign), Yasuko Takezawa (Kyoto University), and Akio Tanabe (The University of Tokyo). This panel examined race, racism, and racialization in the contemporary globalized world, juxtaposing transpacific and transatlantic experiences and perspectives. Ultimately, this session aimed to “provide a common platform for interrogating the various forms and mechanisms of racisms where visible and invisible modalities operate in diverse yet connected ways.” Oral presentations included the racialization of social movements in Ferguson, Flint, and Standing Rock (presented by Harrison), a comparison of the transracial and transsexual movements (presented by John Russell – Gifu University), an examination of the “othering” of Eastern Europeans in Iceland (presented by Kristin Loftsdottir – University of Iceland), racial discrimination in Japan against invisible groups like the Burakumin (an outcaste group that generally lives in small rural communes in Japan; presented by Takezawa), and an exploration of how marginalized social groups have been racialized in Odisha, India during the age of globalization (presented by Tanabe). I especially enjoyed Harrisons presentation, “From Ferguson and Flint to Standing Rock: Resisting Racializing Assaults on Community Sustainability and Human Life.” Harrison illustrated how racial subjection and violence have undermined the well-being and human dignity of racially subjugated communities (namely, Black and Indigenous groups) in the Americas. Additionally, she outlined how groups like Black Lives Matter and the Water Protectors are banning together for their rights to ancestral territories, clean water, and other basic human rights.

The range of diversity at the conference was so refreshing. Over the years, I have become used to being one of the only (or one of a handful of) black scholars at many of the conferences I attend. The disproportionate population of Euro-Americans scholars to Black and Indigenous scholars is well known within the archaeological community and has led to calls of a more inclusive archaeology over the years. But I have noticed that ethnic diversity is still severely lacking at the two to three archaeological conferences I attend or present at each year. Although, Euro-Americans and Europeans are still generally overrepresented in anthropology, Black, Indigenous, Asian, and Latinx scholars were well represented throughout the AAAs. This allowed for a variety of sessions and individual papers to focus on topics that commonly effect marginalized groups like decolonizing institutions (including anthropology and archaeology), health and sustainability for marginalized groups, activist scholarship, and race and racism. Although these topics are not new to anthropology, minority scholars allow for emic perspectives of the issues and fresh ideas for possible solutions to these challenges.

The first session I attended and perhaps, the one I took the most away from was the “Enhancing the Presence of African Americans in Anthropology: Discussion of the Problem” roundtable organized by Tony Whitehead (University of Maryland). When I walked into the room it was jammed packed with mostly African American graduate students and professors (including Michael Blakey, Faye Harrison, Rachel Watkins, Kalfani Ture, and Anna Agbe-Davies). The roundtable style allowed for an open, honest, and critical discussion of the issues that face Black anthropologists throughout our careers. How can Black anthropologists successfully navigate the persistence of anthropology as White space? Will it ever be possible to establish (or in some cases, reestablish) Anthropology Departments at HBCUs? What is the role of Black anthropologists in social justice movements like Black Lives Matter and Standing Rock? As we worked through these questions, a point that was stressed time and time again was the importance of being connected to uplifting communities, mentors, and groups (like the Association of Black Anthropologists). Graduate school can be very isolating and self-doubt plagues many, but having a community to reach out to will help you navigate through the often turbulent waters of academia and remind you that you’re not alone.

Finally, the dual African Burial Ground sessions, “Beyond the African Burial Ground: Anthropological and Trans-Disciplinary Innovations in Theory, Methods, and Technologies” and “Anthropology Beyond the African Burial Ground Project: Epistemologies, Ethics, and Interpreting the African Diasporic and Native American Pasts”, were thought provoking and inspiring. Presentations included with the African American descendant community members at James Madison’s Montpelier (Matthew Reeves – the Montpelier Foundation), the intersection of science and social justice in community-based anthropological investigations (Joseph Jones – William and Mary), the value of Black feminist anthropology (Rachel Watkins), the use of paleogenomics in African Diaspora archaeology (Hannes Schroeder – University of Copenhagen), lessons learned through the Werowocomoco archaeological project (Danielle Moretti-Langholtz), Indigenous archaeology and anthropology for and by Indigenous people (Ashley Atkins Spivey – Pamunkey Indian Tribe), and much more. These oral presentations highlighted the importance of ethical public engagement in anthropology and key takeaways from activist anthropological projects.

Although, I was thoroughly exhausted by the end of the conference on Sunday, December 5th, I really enjoyed my first AAAs and learned a lot. I saw old friends and made new contacts at the nightly mixers. I met a few of my favorite anthropological scholars which allowed me the chance to ask them questions about their research and get advice on my own research interests. It was an invaluable and encouraging experience as a whole. 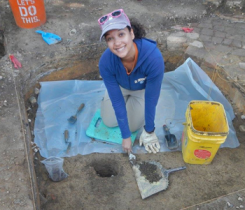 Chardé Reid is a first year M.A./ Ph.D. historical archaeology student in the Department of Anthropology at William and Mary. She received her B.A. in Archaeology in 2009 from the George Washington University. She has a wide range of archaeological field work experience, having worked on archaeological sites in the District of Columbia, Virginia, Maryland, and Athens, Greece. Chardé served as the co-field director of the Shotgun House Public Archaeology Project, Yarrow Mamout Archaeological Project (recipient of a SHA Gender and Minority Affairs Committee’s inaugural Mark E. Mack Community Engagement Award and a 2017 DC Award for Excellence in Historic Preservation), and the Stanton Road Archaeological Project, all in Washington, DC. She is interested in the relationship between landscape and memory in historically Black spaces. Chardé’s graduate research will focus on the intersection between race, identity, cultural landscapes, and materiality through community-based archaeology.