If you follow me on Twitter or Instagram, you’ll know that I recently announced that I am now represented by Leah Pierre of Ladderbird Literary Agency. I’m super excited to begin working with her and hopefully get my words on a bookstore shelf near you.

That said, I’m sure there are questions, so I figured a quick Q&A would be helpful!

One morning in October, I woke up to find there was this Twitter pitching contest happening, #DVPit, which happens to specialize in connecting marginalized voices with agents and editors. I had finished drafting Love in 280 over the summer, so I thought, well, may as well give it a shot. I got interest from three agents, two of whom I submitted queries. When one of the agents passed on my manuscript in December, I actually emailed her to ask if there was anyone else on her team that’d be interested– I’d been doing a lot of reading about Ladderbird and wanted to be there. Incidentally, this agent had been trying to forward my manuscript to Leah, and maybe a month later, I got my offer from her.

You don’t necessarily need an agent if you’re doing academic writing and publishing, but I write novels and am interested in trade publishing, which is much harder to enter without an agent. Many editors, particularly at bigger publishing houses, don’t acquire manuscripts from unagented writers. So, if I want to have a larger audience, having an agent means I have a better shot.

Also it’s great to have someone who loves your words in your corner to advocate for you and help you navigate the industry. I am absolutely transparent about the fact that I have no idea what I’m doing in the Academy and also in publishing, but I’m just writing what I need to write, the way it needs to be written, and worrying about whether it will find a home after.

Now we do some edits to the manuscript before we start sending it to editors. I’m unsure how long this process will take and there’s always a chance we can’t sell the book, but even getting this far is exciting to me.

It’s just right. I’ve always written novels and short stories as long as I can remember. I used to write novel length stories about what I thought my friends’ lives and my own would be like in twenty years. I wrote Harry Potter fan fiction and X-Men stories to entertain people. I entered NaNoWriMo every year (and won) for about five years. I used to write comics and whole newspapers for my family. I’ve blogged for years and found homes for my words across the internet. I have always been a creative writer and trying to tell myself that I was only ever going to write academic pieces for the rest of my life was disregarding everything I had ever done in my life up until this point.

I write across genres because different stories require different forms or containers to be most effective. Some ideas require an article, others a short, still others a novel. And within those forms, I’m still going to experiment and push boundaries because that’s just what I do.

This is me walking in my purpose. This is right.

I get this question a lot, actually.

It’s all about time management. I know that my academic writing pays the bills, so to speak, so I prioritize that. I set a weekly writing goal, which I then break down further. If my goal is 1,250 words per week, I need to average 250 words per week day. It only takes me an hour or so per day to get there, so I have the rest of the day to read and research, and work on my other projects.

Remember, some people work better with word limits/guidelines, others with time limits. Find what works best for you and work with that.

I needed Spring Break more than I even realized. What I thought would be an uneventful week turned into a deep dive into texts I’ve been dying to read for the last few months. Before I knew it, I had devoured four books, plus a graphic novel, the 6 episode Black Panther television show, and all of my usual CW shows.

I realized I needed to give my mind a break and consume things I wanted to read for me when I was developing my blog post for Week 7 (which you’ll notice does not exist). It was supposed to be a “mixtape” of all the best things I’d read for classes since the last time I did a mixtape, which was during Fall Break. I quickly realized that I was having trouble gathering up a list of the things I’d loved, but the list of things I wanted to read but hadn’t was nice and long. I scoured my apartment for unread books and made a quick trip to Barnes and Noble to amass a nice stack of things to read on my week off.

So, here’s a mixtape of what I read (and loved) this Spring Break: 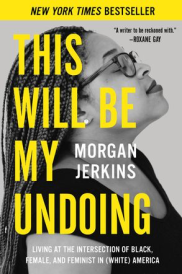 This Will Be My Undoing by Morgan Jerkins

How I found it: I follow Morgan Jerkins on Twitter because she’s an editor at a literary journal I’ve yet to work up the nerve to submit to. But I’ve been following her work and was excited to find out that she had a book coming out. I bought it impulsively at Barnes and Noble a few weeks ago but hadn’t had an opportunity to read until now as I’m on Spring Break.

2 second summary: Essays on being a Black girl/woman in white America.

What I loved about it: Jerkins’s essays really resonated with me, from topics as sacred as Black hair, Michelle Obama and why finding a man is so difficult. She’s raw and honest, brutal and yet touching. I cried twice from the sheer pain of seeing on the page what I’ve felt a million times but never dared to say. She’s a literary role model for me– I can only hope that one day I can decide to be equally as fearless and write my truth, too.

How I found it: I actually rediscovered this after I bought it during a Haymarket Books sale last semester. I bought it because I also follow Eve L. Ewing on Twitter. In addition to being a dope poet, she’s also a scholar and I try to follow as many Black women doing the things I aspire to do as possible.

What I loved about it: In lieu of an exhaustive list of all the poems that I loved from this work, let me simply quote my favorite lines for you:

And the best we can do is protect it

In whatever clumsy ways we can…

How I found it: I was perusing a call for book reviews when I noticed that this novel was tacked to the end of the list of books up for potential review. Always eager to pursue my literary side, I made a note to read it but never got around to it. Until now…

2 second summary: A young boy, Jojo, coming of age in Mississippi deals with manhood, his relationship with both the Black and white sides of his family, and a relationship with the spirit of a story unfinished.

What I loved about it: I have a grotesque fascination with death and I wonder about the departed, in particular my Grandma, whose presence I often feel. Death and spirits are complicated but fixtures of our lives which demand attention. I loved getting to spend some time thinking about the living’s relationship to the dead and why the unburied sometimes sing. 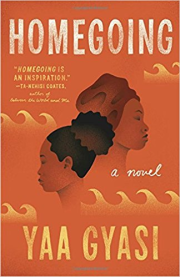 How I found it: My friend, Micah, put me on to it. Only the best of the best can impress her and so when she raved about just the first fifty pages, I knew I had to pick it up and see for myself.

2 second summary: An 8 generation story which follows the lives of two Ghanian women and their descendants, which lead to a beautiful story about the impact of both slavery and the diaspora.

What I loved about it: Yaa Gyasi is an extremely talented writer. She’s got some beautifully clean sentences in her novel, sentences that make me want to pick up a pen and try to see if I can replicate words with even half the impact. The story that stood out to me the most (SPOILERS) was Willie’s story about her husband who passed for white and then simply slipped out of the Black world. (Not without traumatizing her first, of course, though.) I’ve read a lot of passing stories that take place during the Nadir and then into the Harlem Renaissance, but this particular story hit me where it hurt. 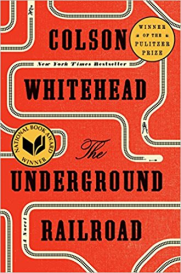 The Underground Railroad by Colson Whitehead

How I found it: I don’t remember the exact first time I heard about this book but I do remember all the hype surrounding it. It was so impactful that I suggested it for review for a potential publication I was working on at the time I found it.

2 second summary: Cora is a enslaved person who decides to escape via the Underground Railroad, which Whitehead has reimagined as a literal railway.

What I loved about it: As I was reading this, I thought back on many of the enslaved histories I’ve read over the last two years in grad school and picked up on many of the details from those histories in Whitehead’s story. Never before had those histories come to life for me more than when I read Whitehead’s novel. Maybe it’s a personal failing, but I simply don’t process informational nearly as well if it isn’t presented in a literary way– if it isn’t a good narrative. It was an extremely informative read, with a strong Black female protagonist (indomitable, is the word used in the novel to describe her.)

There you have it: everything I’ve read– and loved– over Spring Break 2018.

I still have some books on my list that I want to read (including Citizen, An American Marriage, and Invisible Man Got The Whole World Watching) but I’m so grateful for the break and the chance to read some of the novels that have been on my mind for the last few months. I hope this post inspires you to take a look at least one (or 5) new read(s)!