On Thursday night (2/6), I made a knee-jerk decision to tweet about the rejection I’d just gotten. I was feeling a lot of things, including, as the tweet left mentions, sadness, embarrassment and disappointment– yet, I forgot the most important reaction of all: confusion. 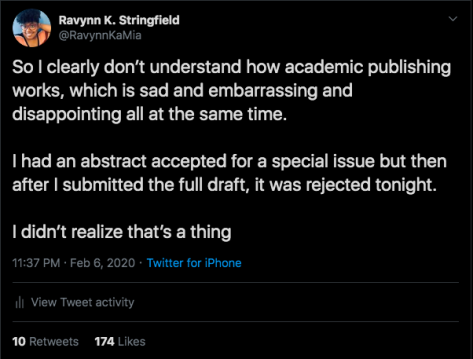 I’ve written more times than I can actively recall about rejection. It happens, with abounding frequency. When writing and publishing is involved, it is inevitable that you are denied, and it’s no surprise that rejections can be brutal.

And yet, when my latest rejection landed in my inbox, I was taken aback. I had submitted an abstract to a special issue, which was accepted. The wording in the initial abstract acceptance led me to believe that, yes, there were a lot of accepted papers, however, logistically, they, the editors, would find space for everyone.

So one could imagine my surprise when I received a brief rejection with no feedback, instead of revisions.

The initial tweet sparked conversation. Over 50 people replied with their own reactions to the situation. Some academics, including a journal editor, expressed shock that this was a possibility:

Others mentioned that this is an unusual, though not unheard of, possibility, that relies on very clear communication: 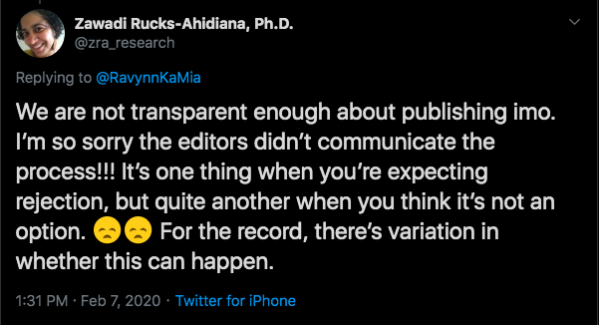 Still others offered suggestions, from reaching out to the editors and asking for feedback to shopping the piece around to other journals. Many offered words of encouragement, but several showed their solidarity by sharing equally jarring rejection stories:

The division amongst those commenting were striking. There were actually several divides and sides to what folks recognized as the issue. Many newer scholars, that tended to be from marginalized communities, had never heard of this practice. However, senior scholars tended to begrudgingly admit that rejecting a manuscript after the abstract has been accepted is not an unheard of practice. There were divisions between whether this was an issue of lack of clarity and transparency, that no feedback was offered, or that it had happened at all.

And while there was at least one comment that suggested that the fault of this was my own for not asking adequate questions and also a reflection of lack of mentorship, most people, regardless of what they saw to be the issue, were in solidarity.

Clearly, there are some things we need to discuss about academic publishing.

While I am a new scholar, I am not completely new to the academic publishing process. I spent my first year in grad school as an apprentice with a scholarly press that published had both a quarterly journal and a books division. I spent two solid weeks in apprentice training learning the ins and outs of academic publishing. Of course, much of what I absorbed during my training and the subsequent year of work did not sink in until I started to hear peers speak about the process and I began to undergo it myself. I began to have a clearer idea in my mind about what terms like peer review and revise and resubmit meant. 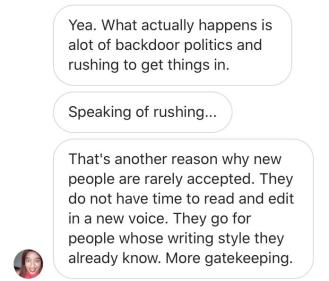 This experience has also clarified ideas about transparency in the processes we must undergo in the Academy. This is the number one reason why I started, and maintain, this blog. I recognize that much of this journey is opaque. Another twitter user, Jameelah Jones, reminded me on Instagram that the structure of many academic journals is not meant to ensure the success of new scholars. There are invisible, gatekeeping rules and constraints that, like spiderwebs, of which you are unaware until you run headlong into them. And unlike those who learn their lessons and fall into complacency, I will continue to fall and record my errors (and triumphs) so those who come after me won’t have to make my mistake. The success of future generations of scholars matter as much to me as my own success.

To ensure the success of future generations of scholars in publishing, it is advisable that we drop the unspoken rules of the Academy that uphold a status quo and begin to operate with transparency. This means: we must be clear about expectations and processes, rather than depend on assumed knowledge. We must actively encourage the growth of emerging scholars, which in this case can mean ensuring constructive critique on pieces of writing. We must lift as we climb.

Publishing does not have to be a gatekeeping practice. It should be an institution that stands for new ideas and the dissemination of new knowledge, rather than a shield that protects the old guard. Given that academic publishing can tend toward being more harmful than helpful, it’s no wonder why newer scholars have invested their time and energy in projects that seek to cultivate their voices, often of their own making.

In some ways, I should be grateful. If not for the state of academic publishing and the tendency of academic structures to both reject and overuse contingent faculty, I wouldn’t have Contingent Magazine. The feeling of shouting into a void with publishing that often reaches a very small audience propelled me to begin writing for online magazines. Lack of transparency has birthed a network of graduate students creating their own infrastructures for each other and those who will come after, just look at #CiteASista, #FirstGenDocs, Blk + In Grad School, and Blackademia. Just look at this site.

I now believe that a large part of my scholarly intervention has been through the creation and curation of this blog, the conversations I can start and cultivate, the people I connect with that have become integral parts of my journey.

And I firmly believe in the possibility and potential the conversations changemakers have, in person and in the digital, to foster new forms of knowledge production and dissemination.

So maybe, the question isn’t even: how do we fix what’s broken?

Perhaps it is: what’s next?