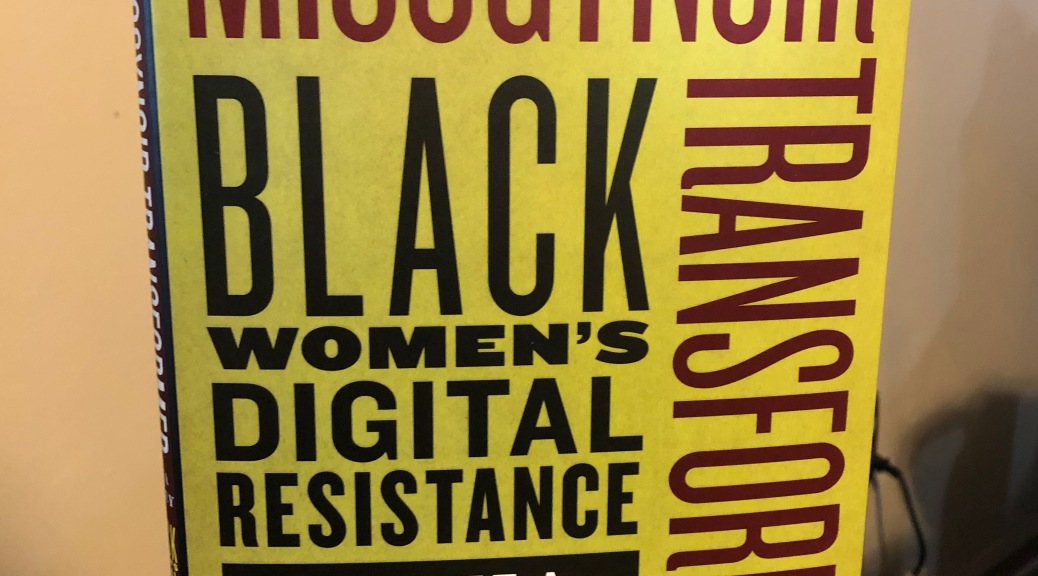 Yesterday, I got my copy of Dr. Moya Bailey’s new book, Misogynoir Transformed: Black Women’s Digital Resistance, and I was so excited that I immediately sat down to read it, and began live tweeting my reactions. My fangirl thread caught the attention of Dr. Bailey, who then asked if I was going to do the whole book. I was absolutely going to live tweet the whole book. What follows is the thread (original link here) of my reactions to reading Misogynoir Transformed for the first time:

So just a few days after I had a melt down about my mental health as a BW, I read this question: “Can a person achieve the WHO definition of health if they encounter racism, sexism, ableism, and other oppressions as a part of their daily life in the world?” (12) @moyazb

It continues: “The stress and material co sequences of system oppression make it nearly impossible to have physical, mental, and social well-being in a white supremacist patriarchal country.” (12) Misogynoir Transformed

I needed to read this because I felt insane. Just the other day, I said to a friend, if I die, it will be because of the impacts of stress and anxiety and depression on my life that no one believed when I tried to explain it to them. I don’t think my bipolar/anxiety can manifest as it does in the DSM bc I’m a Black woman

Therefore, you simply just have to believe when I say I need help. Because if a Black woman says she needs help, you have to know immediately that it’s bad because we are socialized via media messaging and upbringing to swallow EVERYTHING.

More things that I love about Misogynoir Transformed:

Digital alchemy in multiple formations. It can be defensive, Bailey argues, which actively fights back against instance of misogynoir online; and it can be generative, which pushes past and desires new forms of representation

I also appreciate the break down of how this book centers Black women AND Black queer folks, trans folks and GNC folks, which are voices often pushed to the margins of Black gender studies work on Black women/girls. It’s a great model for how to do that with care.

This intro is giving, “Get in losers, we’re troubling the assumed heteronormativity of Black women,” (29) and I love it, let me be gathered

love the chapter 1 title bc it deliberately calls in layers meaning making: “Misogynoir Is a Drag.” Its clever bc it mirrors: Misogynoir shows how layers of meaning are inextricable and drag’s multiple meanings are all necessary to understanding harm against BW.

Speaking of meaning making, let’s get into how Bailey sets up reading and dragging as direct linguistic descendants to signifying!!! (36)

One thing about Black folks, we love good words.

Another read you probably didn’t want today BUT: “It should be no surprise that toxic masculinity does not need a man to do it’s bidding.” (46)

The thing that is very clear to me about Bailey’s work is that everybody is on notice. 😂 masculinity and patriarchy is gone do what it and do and so sometimes, you will need to be gathered regardless of who you are and/or your identity. Everyone needs to be called in sometime 🤷🏾‍♀️ discussion time!

There’s an incident of police violence against a 15 yo Black girl captured and disseminated by a white boy; Bailey writes that this white boy engaged in defensive digital alchemy.

Who can perform digital alchemy? Is it digital alchemy if it was unintentional? Moved onto Ch 2 on trans advocacy and am on p. 70 thinking about Janet Mock, realness, trauma and the Black women’s autobiographies.

One thing my students spoke about often this semester was BW trauma; I countered by offering that we should seize control of our stories + My thought, which is sort of reflected here, is that we absolutely don’t want other people to tell our stories for us bc of how we’re often rendered thru others’ eyes…doesn’t mean we’re limited to trauma narratives; it just means BW should dictate how/if/when we share our pain I’m in p. 72-75 thinking about pageants + what does or does not make a digital alchemic act feminist.

Everything Bailey says is true; but I know a Black girl who found pageants a way to learn to love herself. It was transformative for her. (Start 49:33)

Bailey prefacing #MisogynoirTransformed with a bit on how her intellectual pursuits shifted is important to me—originally she wanted to be an MD. It also makes me link the section on trans women’s health to @alondra’s Body & Soul. I read it with Prof Harold + think about it often

Reading the section on CeCe McDonald and am trying to figure out what the hell is up with Minneapolis?!

Every time someone asks if anyone still blogs or if blogging is dead, an Angel loses their wings. Ima read them: “Blogs are part of the digital woman of color feminist story as they serve as a space for building connection and understanding through the digital world.” (93)

“Digital media makers are less concerned with creating content that reaches privileged out-group members than creating content for their own networks.” (104) Gotta call in my fav webseries @blackenough__ & my fav advocate of indie media @tayleighlamb

Same page Bailey calls in worldbuilding, which is impt in my work which also centers fantasy. She argues that the liberatory worlds built in Black queer webseries are not utopias; this is also something I dealt with teaching. Fantasy =/= utopia. I don’t think liberation is utopia

But it’s hard right, bc I think what my students were grappling with was so much media that dehumanizes and is violent to their self, that they perhaps that their ideal reality was fantasy. Not quite the function of fantasy, which really, is to, momentarily, suspend disbelief.

Okay so now I’m thinking about “Queerness becomes Taylor’s way to name her multifaceted desire.” (110) Bailey demonstrates how the openness of the webseries as a form offers more opportunity to showcase heterogeneity of Black queer life.

But I’m also thinking about naming. I’m drawn back to this moment when Bailey positions Janet Mock in a tradition of Black women autobiographers and what it means to be able to define the self, for the self, which again returns us to trauma—claiming our agency means claiming our stories to do with what we see fit

BUT ALSO, to return to this idea of openness of the webseries, she argues that they “both reinforce and challenge dominant ideas about sexuality.”

I love this thing: “both/and.”

I love that I have internalized multiple things can be true at once; it frees you up (An aside: I need to watch the episode of Skye’s the Limit where Mutha Indigo tells Skye she’s “feasting on scraps; little bits and pieces of ambiguous romance.” [113-114] because that was a read I absolutely was not prepared for.)

On p 127 when Bailey talks abt the group of friends in Between Women attempting harm reduction by not calling the police for their friend experiencing IPV, I immediately thought of abolition + what I learned from Mariame Kaba’s new book then the next sentence was about abolition!

I’ve been trying my best to read and engage with abolitionist words and sometimes my mind explodes at how deeply interconnected all the things I care about are and how their are no single issue struggles because we do not lead single issue lives. (Lorde)

I’m just thinking about the seamless way Bailey lays bare IPV, abolition, queer relationships, toxic masculinity while also making claims about form as well as content…and bruh, I need to just hang it up now, aint no way I can ever write something like this 😭

Chapter 3 is my favorite so far! Ugh. The talent.

Black women, queer folks, GNC folks and trans folks use of social media sites will never not fascinate me mostly bc I am very much a Digital Black Girl™️ and I feel seen when we talk about our online lives. Again, I quote “Alter Egos and Infinite Literacies,” by JMJ…every day

On p 150 reading the analysis of the interview w Tumblr user Danielle Cole + thinking so much about how I write for me, but also to be heard. Ofc I often cite, “I went online to try speak myself into existence by speaking to myself.” From Alter Egos & Infinite Literacies @jmjafrx

The reason Tumblr can be a space of generative digital alchemy is part due to design; the site is structured around shared interests, rather than offline connections, Bailey argues. Finding this space that explodes preconceived notions of Blackness + queerness blew my mind at 16

Tbh the difference between defensive digital alchemy and generative feels like the point I tried to make to my students all semester: identifying issues and raising awareness is a thing, AND if we know that it what we do not want, what *do* we want? How do we make it?

YUP, so now Bailey argues that sites like Tumblr (and Twitter) are effective in being places to begin community conversations about issues like Misogynoir but it does not necessarily transform or combat the Misogynoir itself (154)

But then it was followed by a section on personas, which is something that really fascinated me with BW in digital and IRL I’m obsessed with this article by Taylor Crumpton about Black women in rap’s alter egos!

“generative digital alchemy becomes a praxis that transforms Misogynoir through what it facilitates.” (161)

If y’all thought I was obsessed with the idea of digital alchemy before… On p. 166-167 and thinking about what would happen if we reckon with social media as the tool that is. It was something I struggled with early in my grad school career bc the people I met here were my life preservers; but the platform is the not the relationship, it facilitates. P 169, first full paragraph translation: “I miss when we read on the internet.” 🌚

In citing her interview with Myers, Myers says, “…There are ways where Black women are ‘appreciated’ but it still feels…I wouldn’t say appreciated. ‘Recognized,’ ‘celebrated,’ I guess, in the sense of visibility, but it can so quickly turn on its head.” + WHAT HAVE I BEEN TELLING YALL ABOUT ME FEELING USEFUL AND NOT LOVED?! I have been screaming it for the last few weeks and it’s RIGHT HERE IN THIS BOOK that we need BW women to be celebrated and appreciated AUTHENTICALLY. (170)

WHEW, COME ON THEN

Wrapped chapter 4, so I’m just gonna go to the conclusion.

I am already snapping because I still remember the first time I got dragged by a Black woman Professor publicly. Lisa Woolfork got me together on the *first* day of her class my second semester third year at UVA. A few quotes to leave you with from the conclusion:

“we need to continue to stretch our imaginations, because another world is not only possible, it is required for more than mere survival.” (178) “I love these imperfect & messy means for making something out of the scraps you have been given. But this practice of making a way out of no way is not sustainable. I envision a Black queer feminist future where we have what we need and Misogynoir is truly transformed…” (181) “Even as I work toward the end of Misogynoir, I know that it requires the transmutation of people.” (181) And fin.

Thank y’all for joining me in this day long live tweet of @moyazb’s #MisogynoirTransformed, available from @NYUpress (link below)