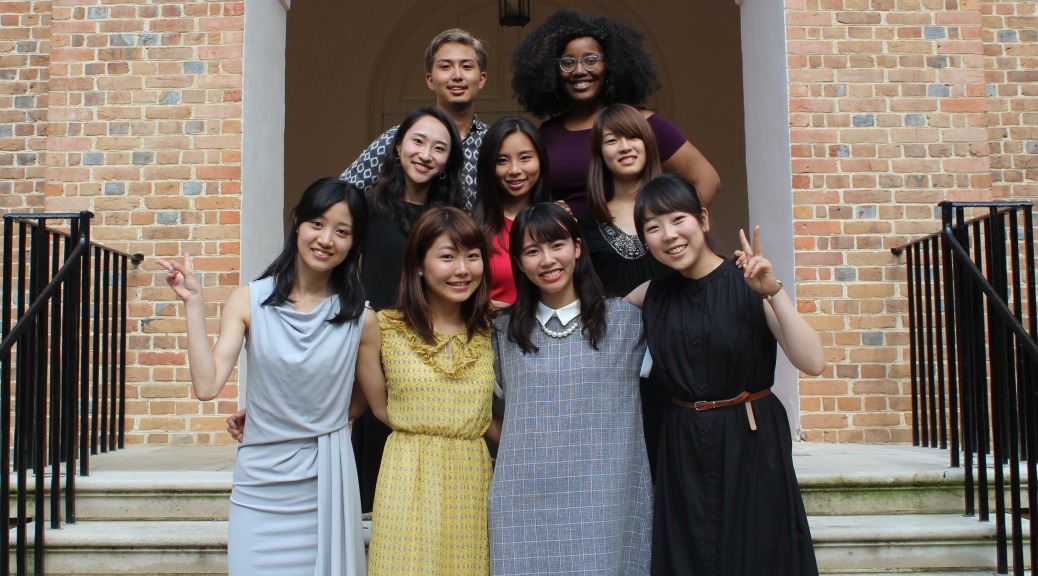 If you follow me on Twitter, you might have noticed that I had been tweeting using the hashtag #KeioChronicles. This summer (as I did last summer), I was one of three Course Instructors for the Keio/William & Mary Cross Cultural Collaboration. Japanese students from Keio University come to William & Mary for a two week program, which involved lectures on American culture from W&M faculty, dialogue classes, or discussion sections, led by Course Instructors, and group research projects that focus on some aspect of cross-cultural analysis. In addition to all of this, we also took the students on cultural “experiences,” some of which included going to the beach, experiencing American consumption at the Williamsburg Outlets, and attending a baseball game.

My primary role was to lead my class in discussion of the lectures that we had. I helped them formulate questions and did my best to answer them, or at least help them direct their questions to the lecturer of the day, who visited each dialogue class for about fifteen minutes. I was also responsible for grading my students on their participation in class, on the journal entries that they write throughout the program, and on their final research project presentations. And, as if that were not enough, I also drove the vans for the program to get the students from place to place. (We’re talking huge 12 passenger vans.)

I always learn a lot from participating in Keio, whether it be from watching their final presentations, which included topics ranging from the types of ties worn by politicians in American and Japan to differences in elementary education in the two countries, or in my everyday interactions with the students, like taking them to Chick-fil-A for the first time. Last year was particularly heavy because I had to learn how to teach through a tragedy as it was happening. I had to keep it together while white supremacists marched on my former home of Charlottesville. I had to try not to cry when I heard the news that one of them had driven a car into a crowd of people, killing a young woman. But most importantly, I had to learn how to turn tragedy into a teachable moment when it felt like my world was falling apart.

So upon finishing this round of the program, it felt appropriate to come up with a list of things I’ve learned from Keio, my students, and teaching this year.

Teaching Keio was an adventure: every day was different, with a new topic and new questions. Even when I thought my students would struggle, they surprised me by being engaged, asking amazing questions, and sharing insightful thoughts. They brought a good energy to my class and we learned together in an environment that held as many laughs as thought provoking conversation. Teaching foreign students is truthfully not that different from teaching students from your own country. The main difference is that while teaching students from a different country, you will be forced to reckon with much more of what you take for granted. The very things you accept as true are the things they will want to know more about. The very fabric of your existence, they may know nothing about: I got blank stares when I asked them about whether they had heard of #BlackLivesMatter but they all nodded when I mentioned #MeToo. Suddenly, I was forced to explain a movement in detail that has become the backdrop of my life since 2014 so they could understand the necessity of such a force. I taught them about my America, and in return they attempted to explain Japan to me: why they had heard of #MeToo and not #BlackLivesMatter, whether or not gentrification or some equivalent existed in Japan, and generally why more people don’t protest in Japan. One of my students brought a wonderful Japanese expression to my attention: The nail that sticks out gets hammered down.

But it was more than just being in the classroom together that brought me joy: it was the moments of watching my students master ordering food at restaurants and trying the spiciest wings at Buffalo Wild Wings. It was our spur of the moment Target trip after lunch, all of our van rides together, and hearing Japanese mixed with English. It was the big things like watching my students dance and sing with unbridled enthusiasm at the Talent Show; it was the little moments like their smiles as they read the notes I wrote them when it was time to say goodbye and all of the pictures we took together that night.

To the Red Dialogue Class–

Thank you for your time and attention. I wish you the best in all your future endeavours.

Love from your teacher,

This week on #BGDGS, @ravynnkamia discusses how writing fiction has helped her draft her dissertation. 📚 Link in the bio!
@ravynnkamia reflects on who she’s writing her dissertation for, why she’s writing it, and why it matters in “Dissertation Check-in #2: Motivation” Link in bio
Check out last week’s #BGDGS post, “Coping and Clovers,” about how @ravynnkamia is dealing with uncertain times. #linkinbio
This week on #BGDGS, @ravynnkamia provides us with her dissertation writing methods, process and time management tools. Link in bio.
First: I know I’m terrible at updating this instagram page. Do know that There’s typically new content on the website every Sunday of the semester regardless of whether I post here. Second: I got a chance to hear Catherine Knight Steele talk about Digital Black Feminism at Chesapeake Digital Humanities Conference (#cdhc20) which was hosted at William & Mary last Friday. Check out my latest on the experience, meeting CKS and daydreaming about the New Black Digital Feminist Vanguard.
Check out this week’s #BGDGS post, “Meeting Nic Stone and Other Adventures in Friendship With Writers” Link in the bio!
Follow Black Girl Does Grad School on WordPress.com