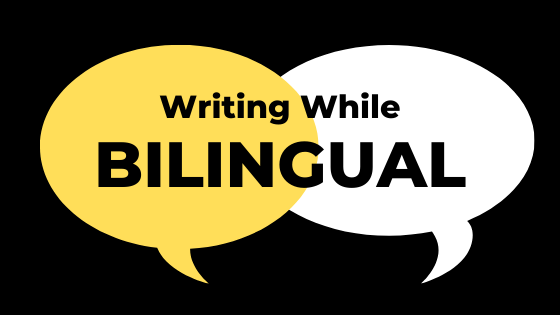 That sentence was one of the hardest to write. But harder still was coming to the realization that yes, I am indeed bilingual. See, I grew up in Uganda, a former British colony in East Africa. From the time I was three I spoke both English and Luganda. One way colonialism works is it destroys indigenous languages, by forcing the colonizer’s language onto the colonized. In the case of Uganda, the official language is English. And though I can fluently speak Luganda, I struggle with reading Luganda and writing it is even harder. But Luganda is such a huge and very important part of my life, and it affects the way I think and view the world.

But just as Luganda has been a part of me, so has English. My entire academic career has been in English; beginning in kindergarten and now in graduate school. Thus, I have written and spoken English, the Queen’s English, I’ll have you know, for the majority of my learning. But my introductory writing lessons in English were in Uganda. I was taught to write in English, specifically creative writing, but in a Luganda way. This meant much of my writing was telling, what I like to call wandering stories. When I think about the way I write and tell stories, Amos Tutuola’s novel, The Palm Wine Drinkard, comes to mind. Because the way I grew up involved hearing stories told with a lot of details, tangents, and with multiple characters, some of whom had a tendency to just disappear without having advanced the plot of the story much. So, I learned to write stories the way I heard them told, even though I was writing in a foreign language.

Graduate school writing, I believe, is a form of storytelling.

Graduate school writing, I believe, is a form of storytelling. And when I started my graduate school career, I had not written for over five years. I had been working and having a child. I quickly learned that writing is a muscle– one that if you do not exercise, will quickly atrophy. But never having been one that shies away from exercise, and because I am now a graduate student, I began to collect books on writing. And I learned some good tips such as write your introduction last, use simple English, write an outline, know your audience, and edit, edit, edit. The idea of simple English has always worried me. As a child who read Chinua Achebe’s No Longer at Ease, I am forever stuck on a particular scene in that book where Obi Okonkwo’s character returns home from studying English in the United Kingdom– a decision that had already disappointed the community that fundraised to send him to school. Upon his return he gives a speech which further disappoints his community because he uses “is” and “was” English instead of using big words. I have already disappointed my Ugandan family by not being a doctor, (though I am attempting that with a PhD, it is just two letters after all), a lawyer or an accountant. I am not going to disappoint them further by using “is” and “was” English too.

The writing advice was all good. But there was the messy case of the subject matter of my graduate work; sex and reproduction among women and girls from Africa living in America. Women and girls like me. I am well aware for whom the university was built for, and it was definitely not someone like me. I wanted to write for us; for women and girls that had taken that journey from Africa to settle on this “shining city on a hill.” I wanted this story, the story I was attempting to write during my qualifying exams, to be for us. And I found I couldn’t. Because to write it in the way I wanted to, English, I found, was inadequate. I knew the mechanics of putting together a sentence. I knew a first draft would always be terrible and that it would be the fifth maybe even sixth draft that I would finally send to my committee. But the content and the way I wanted to write that content; English wasn’t working out. In my head it was in Luganda, because Luganda allowed me to say what I wanted to say in the way I wanted to say it. But because I never learned to write it, but only to speak and think in it, English was all I had. And when I wrote in English attempting to fit Luganda into English, my paper was incoherent. I was frustrated and confused. How could I still be struggling with this god awful, clunky language, that I had been using for over twenty years?

While I in my own little world struggling with writing in English, Dr. Toni Morrison went home. And my literary world turned a little darker. A world that I had always found solace in when the real world got too much. I wanted to sit quietly in a corner for days and pore over her work. Read every novel and essay she had ever written word by word, sentence by sentence and turn it over and over again in my mind, and just glory in its beauty. I wanted to reach out to my black women friends and just talk to them about what she and her work meant to us as black women and as mothers. I wanted a month to collectively mourn her passing. But I couldn’t because deadlines.

So, I did the next best thing, I searched for audio and videos of her speaking. And I took a few minutes throughout my day to sit quietly and listen to her voice. And that is how I came across Dr. Morrison’s 1993 Nobel Prize in Literature lecture. That speech was exactly what I needed, and it made me furious. Because it spoke to everything I was struggling with and at the same time I felt there was no answer to my writing dilemma. I saw the whole of academia as those young people who set out to question what I was writing. But I was also the young men, holding language in my hand. A language that had been forced onto me before I was even born. But even though this language was forced onto me I still had all the responsibilities of that came with holding that bird, language in my hands. I wanted to ask Dr. Morrison what to do but she had gone home. But she had graciously left us a whole library of answers and so I went looking for an answer in her words. I picked up another of her books. I picked The Source of Self-Regard, though I prefer the visual painted by the European title, Mouth Full of Blood. And again, because every time I worry about writing, I return to Obi Okonkwo, I went straight to the essay on Chinua Achebe. And there, Dr. Morrison answered my question.

I am bilingual. I write in two languages but mostly I write for myself and those like me.

J. Nalubega Ross is a Ugandan American living in the dry dry desert of Arizona. She is currently pursuing a graduate degree at Arizona State University. Their graduate work is concerned with how people from Africa living in the United States look for information about sex and reproduction. And once they find that information how do they use it make decisions about having or not having sex and whether or not to reproduce. When not reading books for graduate work and avoiding writing, Nalubega spends time watching and commenting on cartoons with her toddler and ranting to her partner about sex and reproduction in the United States.